What is the Renko indicator and how to use it in trading?

The Renko indicator tracks the price movement of a financial asset in the form of bricks arranged diagonally. Find out what a renko chart is and how to incorporate it into your trading strategy.

What is the Renko indicator (Renko Charts)?

A Renko indicator is a type of stock chart that is constructed in the form of bricks of equal size that follow one another to draw an upward or downward trend by following the price movement of a financial instrument.

From the Japanese “ Renga ” (which means brick in English), this indicator was developed by a Japanese trader by the name of Munehisa Homma, nicknamed the “god of the markets”.

Unlike other indicators, the Renko chart uses only the price movement, while removing the time factor as well as the phases of horizontal price oscillation without direction. A Renko chart is simply a summary of Japanese candlesticks and point and figure charts.


The purpose of this indicator is to allow the trader to focus only on large and significant market movements, depicting the current price direction in a simple and clear manner.


The Renko chart only displays price movements that reach or exceed the limit previously set by the trader himself. Any price change that does not reach this minimum amount is generally filtered out.

How to understand and interpret a Renko chart?

The Renko chart is made up of a series of bricks (also called boxes or blocks) of equal size, positioned diagonally at 45 degree angles to each other (up or down), and which indicate upward (green) or downward (red) price movements.

The bricks of the Renko indicator have a time axis, that is, they are created over time. They can take seconds, hours, or even days to build depending on market volatility. In a context of high volatility bricks are created quickly, while in a market with low volatility it will take longer to see a renko block created.

The first step in building a Renko chart is to select a brick size that represents the magnitude of price movement. Choosing the size of a brick is important because:

The larger the brick size, the longer it may take for the indicator to form

When the size of the brick is small, this formation will be faster.

Although a fixed box size is frequently used by traders, the use of the ATR (or Average True Range) indicator, which is a measure of volatility that fluctuates over time, is also recommended.

Decreasing the size of a brick will certainly create more fluctuations, but will also highlight possible price reversals sooner. A larger brick size will reduce the number of swings and noise but will be slower to signal a price reversal.

When a strong trend is forming, Renko traders may be able to follow that trend for a long time even before a brick forms in the opposite direction. Trading signals are usually generated when the direction of the trend changes and the bricks alternate colors.

It is very easy to interpret a Renko indicator: when the bricks are placed on top of each other, it is an uptrend and when one brick is below another, then we speak of a downtrend.

How is the Renko indicator calculated?

There are different formulas to calculate the Renko indicator . Some are based on highs and lows, while others tend to consider all price behavior spanning the opening and closing price of an asset.

The dimension of a renko brick takes into account a unit of variation whose value is calculated by considering elements such as the price and the different combinations of prices.

How to determine the size of a Renko brick?

There are several formulas to calculate the size of a brick in the renko indicator:

The first formula requires taking into account a single price in which the unit of variation of the Renko can be applied to the opening price, the highest price, the lowest price or even the closing price.

The second formula consists in using a method which is based on weighted, median or typical prices. In this approach, the variation unit can be applied to different formulas such as:

There are also trading software like MetaTrader MT4 or MT5 which offer to use an ATR (Average True Range) indicator which measures the size of the Renko bricks, gives dynamic support and more accurate resistance levels. 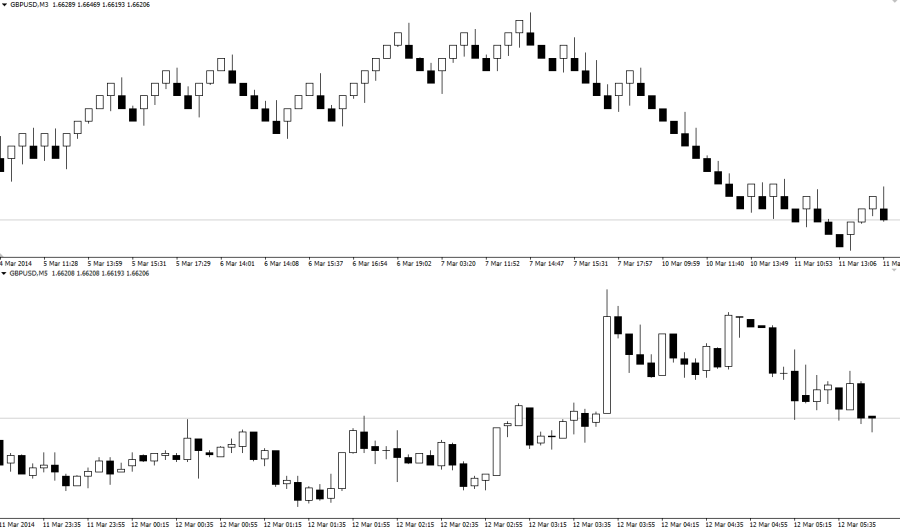 The above figure is the pictorial representation of Renko Chart and Japanese Candles.

How to trade with the Renko indicator?

The Renko indicator, which helps filter out market noise and see the trend more clearly, is often used by traders who follow trends and trend reversals.

It is ideal for certain short and long term trading styles such as scalping , swing trading or day trading . The Renko indicator is also used in different markets such as forex, indices, commodities and cryptocurrencies.

Advantages and Disadvantages of Renko Charts

Trading with the Renko indicator has advantages and some disadvantages.

The advantages of the Renko indicator

The disadvantages of the Renko indicator

Among the disadvantages of the Renko chart, let us mention that:

Difference between a renko chart and a Japanese candlestick chart

The other difference between the two types of charts is the relevance of the information.

Indeed, a renko chart does not usually give you the most recent information, because a brick only updates when a new brick is created, namely that the price has moved up or down by the unit. variation chosen.

As renko charts are based on brick size, they also do not reflect the exact price, high or low, of a hit asset.

The smaller the brick size, the faster the price information will update on the renko charts .

But a smaller brick size will also make the graph look choppier.

Difference between a renko chart and a heikin ashi chart : renko Heiken Ashi

Although heikin ashi charts are also developed in Japan and can serve the same purpose as renko charts in that both highlight a trend or trend reversal.

These two graphs differ in the size of each brick.

For example a renko chart uses a fixed value to determine the size of its bricks while heikin ashi charts take an average of the open price, the high price, the low price and the close price for the period current and previous.

Therefore, the size of each box or candle is different and reflects the average price.

A renko chart helps to identify the market trend, as do the heikin ashi , Kagi line or Three line break charts.

Renko charts are made up of bricks that are created at 45 degree angles to each other.

Consecutive bricks do not lie next to each other.

Renko charts are created from opening, closing, high or low prices but they can also be created from formulas based on weighted prices, median, typical, etc.

Renko charts have a time axis whose time scale is not fixed, as some bricks may take longer to form than others, depending on how long it takes the price to move the size of a box.

Renko charts filter out noise and help traders see the trend more clearly, since all moves that are smaller than the size of the box are filtered out.

Tips for trading with renko

When using the Forex renko chart with another indicator such as RSI , macd or stochastic , it is better to use a brick model that will be calculated from the ATR indicator as seen in the paragraph below above “Formula or method for calculating the renko chart ”.

Moreover, for this combination of indicator to be profitable, it is advisable to use the same periodicity, both for the ATR and for the technical analysis indicator RSI, macd , or stochastic .

For example for a renko trading strategy based on the RSI , it is sufficient to use the 20-period RSI indicator and a 20-period ATR to optimize the reading of an ATR renko brick .

The Renko indicator , which is made up of bricks whose size depends on the unit of price change, allows you to quickly identify the market trend by filtering noise or micromovements. This indicator can be used alone, or in combination with other indicators like Japanese candlesticks to confirm trends.

You can use the Renko indicator to trade indices, commodities and forex via MetaTrader 4