The moving average is one of the most versatile and widely used technical indicators in the stock market. Due to the way it is constructed and the fact that it can be easily quantified and tested, it is the basis of many trend following systems. Graphical analysis, or chartism, tends to be subjective and difficult to test. Trading rules based on moving averages, on the other hand, are simple and indisputable. While two technicians can disagree on the nature of a price pattern, such as between a triangle and a wedge, the signals from moving averages are precise and not open to discussion.

The moving average is the most popular indicator to trade in for technical analysis, and for good reason, it's both simple to use and effective.

Let's start by defining what a moving average is. As the name suggests, it is an average of a number of data. For example, if one wishes to obtain an average of the closing prices over 10 days, one adds the prices of the last 10 days and one divides the total by 10. The term “moving” is used insofar as only the prices of the Last 10 days are used in the calculation. Therefore, the set of data to be averaged (the last 10 closing prices) advances day by day.

Moving averages are basically a trend following tool. Their purpose is to identify or signal that a new trend has started or a previous trend has ended (range phase) or reversed. Its purpose is to follow the evolution of the trend. A moving average can be thought of as a curvilinear trend line. On the other hand, it does not make it possible to predict the behavior of the market as chartism attempts to do. Moving averages are used to follow a trend, not to predict it. They never anticipate, they only react. They therefore allow us to indicate changes in trend after the fact.

The chart representation of the moving average lags the market action. A short moving average, such as a 20-day average, is by definition closer to price than a 200-day average. Lag is reduced with shorter averages, but can never be completely eliminated. Short-term averages are more sensitive to price action, while long-term averages are less so. In some types of markets, it is therefore more advantageous to use a shorter average and, in other cases, a longer average, which will be less sensitive as a result.

The simple moving average, or arithmetic mean, is the most widely used on the markets. But some question its usefulness on two points. The first point is that only the period covered by the average (the last 10 days, for example) is taken into account. The second point is that the simple moving average gives the same weight during each day. For a 10-day average, the last day has the same weight as the first day. Each day's price is weighted by 10%. In a 5-day average, each day would have a weighting equal to 20%. Some analysts believe that a greater weighting should be given to recent price actions. On the chart below, the last point of the simple moving average at 6,784 points is calculated in relation to the last ten candles present in the rectangle. 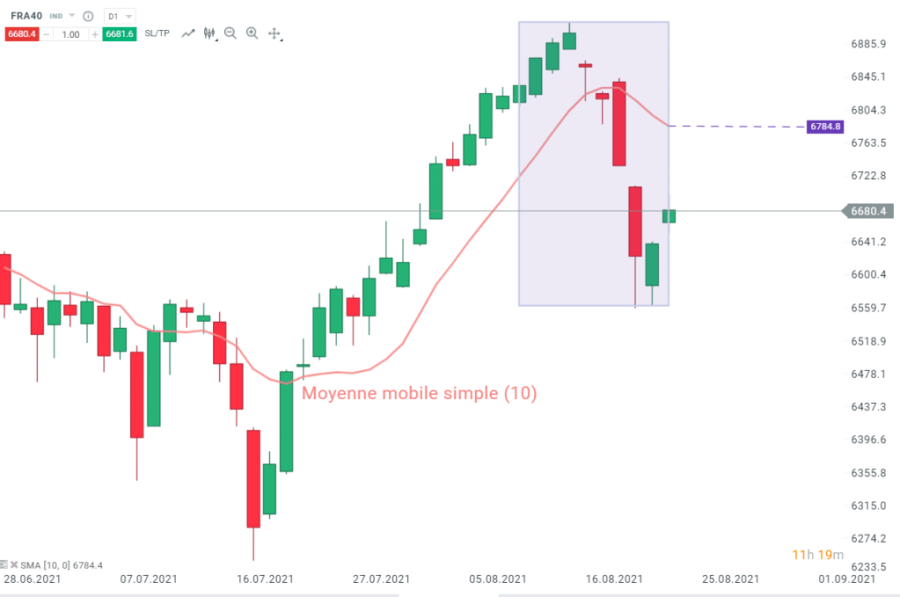 The above chart is a Graphical representation of the CAC 40 (FRA40) in daily data with a 10-day simple moving average.

In an attempt to correct the weighting problem, some analysts use the linearly weighted moving average. In this case, the closing price on the 10th day (for a 10-day average) is multiplied by 10, on the ninth day by nine, on the eighth day by eight, and so on. Greater weight is therefore given to the most recent fences. The total is then divided by the sum of the multipliers (55 in the case of the 10-day average: 10 + 9 + 8 + 7 …+ 1).

How to invest and trade with moving averages?

By using a very short-term average (5 or 10 days), the average tracks prices very closely and several crossovers occur. Using a very sensitive average therefore produces more signals, including many false signals. If the average is too sensitive, some of the short-term random price movement (or “noise”) generates false trend signals.

Although the shorter average generates more false signals, it has the advantage of giving trend signals earlier in the move. It goes without saying that the more sensitive the average, the earlier the signal will be. The trick is to find the average that is sensitive enough to generate early signals, but insensitive enough to avoid most of the “noise”.

Identifying trend signals with the double crossing of moving averages

As can be seen in the chart below, the crossing of the 10-day moving average with the 50-day moving average made it possible to take advantage of a good part of the decline that began at the end of February 2020. However , this system provides many false signals in the opposite direction to the underlying trend as we will see later on the CAC 40 . 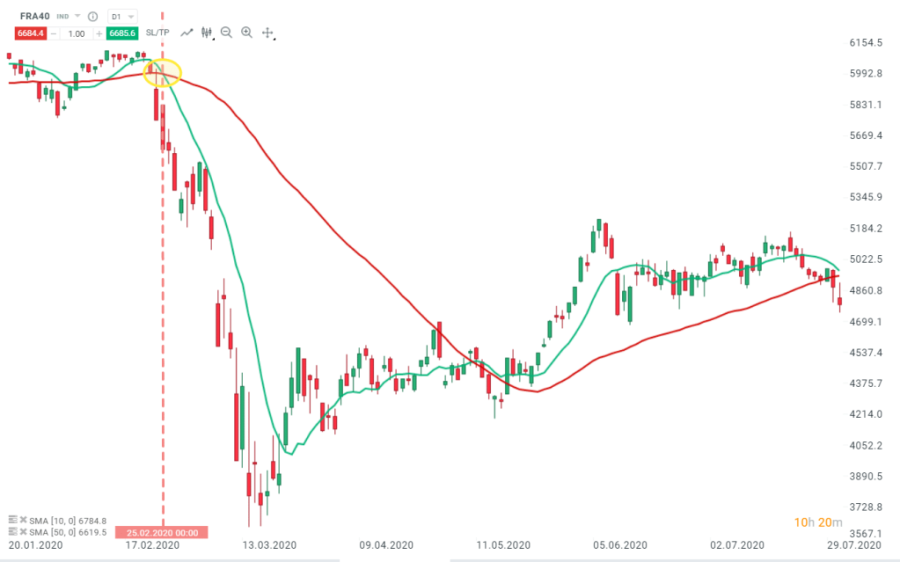 Identifying trend signals with the triple crossing of moving averages

Example of a sell signal with the crossing of the 5, 10 exponential moving averages with the 20-period corn average 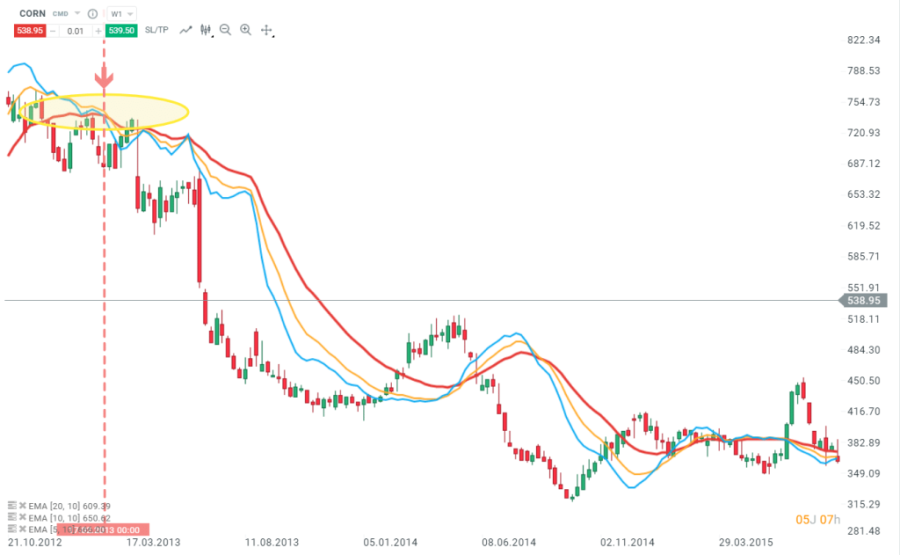 Example of a buy signal with the crossing of the 5, 10 exponential moving averages with the 20-period corn average 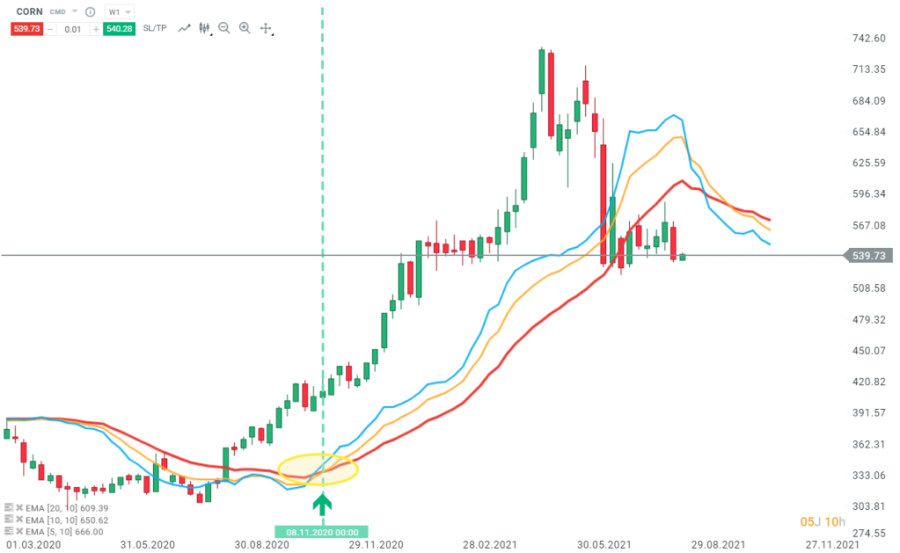 How to choose a period for a moving average?

Moving averages work best on a daily chart and in a market with a clear trend . (If the trend is not stable, then moving averages give a lot of false signals.) It is also worth noting that moving averages are applicable not only to price movement, but also to other technical indicators. For example, the 5-day moving average is often used to track changes in trading volume.

A moving average can perform the same function as a trend line, i.e. serve as a support line when prices fall in an uptrend and resistance when prices rise in a downtrend.


The advantage of a moving average over a trend line is that it allows you to combine several (usually no more than two) curves to obtain additional trading signals.


An additional signal when working with the MA indicator is the difference between two moving averages. So, during a strong uptrend, the short-term average rises faster than the long-term one.

The distance between the two moving averages increases. A shrinking distance is usually an early signal that an uptrend is losing momentum.

What are the limits of moving averages?

There are 2 major limitations of moving average technical indicator:

Let us discuss them in detail:

A sometimes complex choice of period

As we have seen, the difficulty that a trader may encounter when using moving averages lies first of all in the choice of periods. Indeed, each instrument will react more or less well to different moving averages. It is therefore necessary to adapt the parameters of the moving averages (simple or exponential) and the number of periods (5, 10, 20, 50, 100, 200) to each instrument, over a given time unit (5 minutes, 15 minutes , 1 hour, 4 hours, 1 day, 1 week, 1 month).

The possible presence of false signals

Furthermore, the large number of false signals for short moving averages, or the delay that long moving averages will have, requires the application of other tools, such as oscillators, which can act as filters and provide indications concerning the strength of the trend. In this sense, many traders will use the RSI or also the MACD .

For example, a downward crossing of the 50-period moving average with that of 200 periods, commonly called a “death cross”, will only occur after an initial bearish phase. However, due to this lag, this crossing of moving averages can be used as a confirmation of a trend reversal or as a signal in combination with other oscillators or ideally, in the presence of a signal from chartist analysis. classic.

Below is an example of the use of moving averages on Bitcoin , in addition to chartism. A first sell signal was given when prices broke out of the upward slant connecting the troughs (red circle). There followed a “death cross”, a sell signal showing a certain delay. However, only a break of the major support at $30,000 would have confirmed the signal generated by the crossing of the moving averages. A buy signal was generated at the breakout of the bearish slant linking the recent highs. A break of the psychological threshold at $50,000 would strengthen the bullish outlook. Such prospects could be confirmed very soon if we witness a “golden cross”. 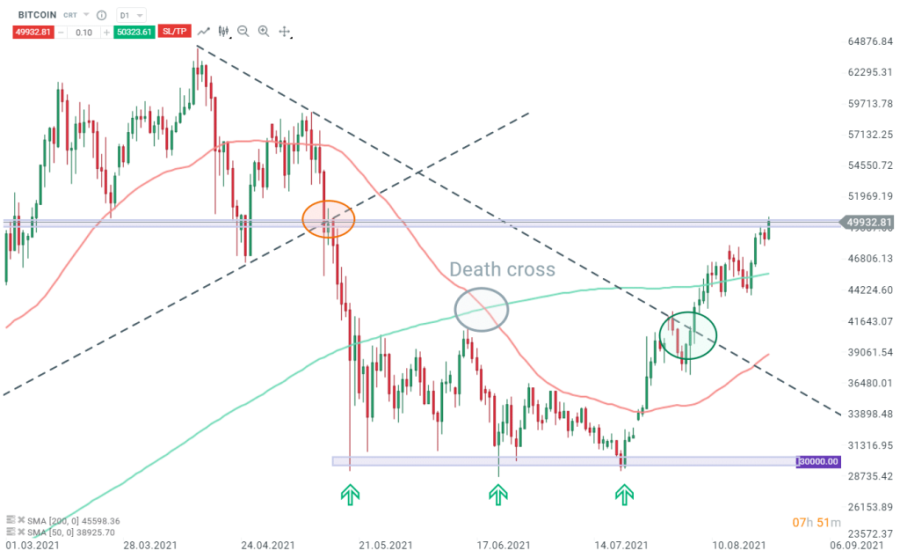 It seems pretty clear that using the crossover of a short moving average with a long moving average is too far behind to take full advantage of a downside correction during a long-term uptrend. On the other hand, as we will see later, this tool can be very useful in order to confirm a recovery in the direction of the underlying trend.

Practical cases of using moving averages on the CAC 40 index


We will now look at the CAC 40 index and apply different strategies to it on moving averages. 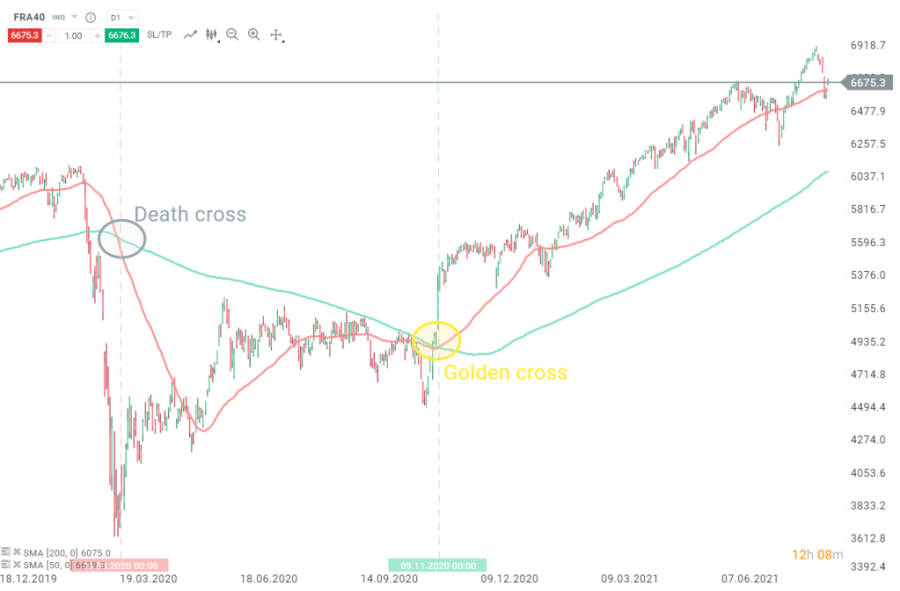 The crossover strategy (in gray on the graph) of a short moving average (50 days) with a long moving average (200 days) will not have made it possible to detect the considerable decline caused by the spread of COVID19. Indeed, the “death cross” generated a very delayed signal, when the decline had ended. On the other hand, the “golden cross” (in yellow on the graph) will have made it possible to confirm the recovery in the direction of the underlying trend. Thus, this system seems more suitable in trend following strategies. 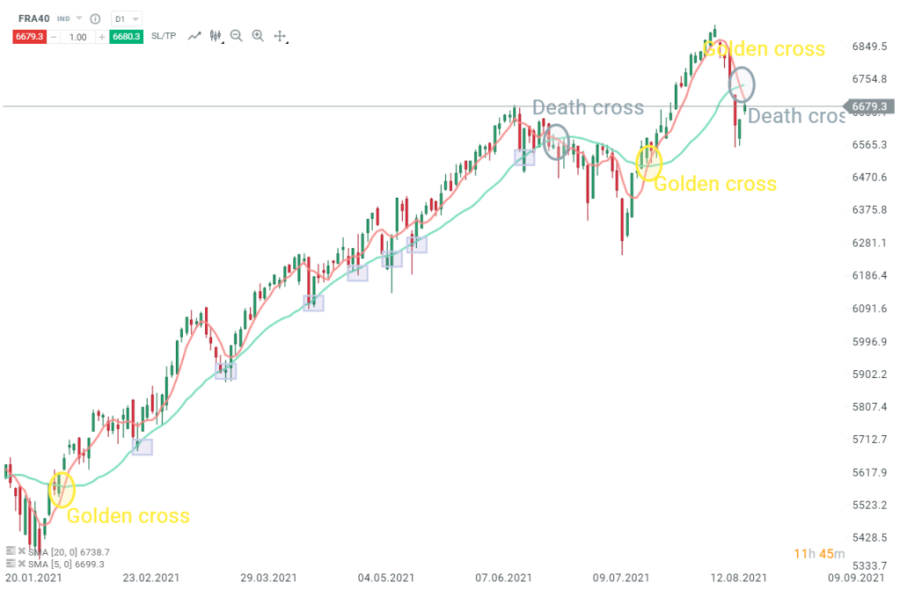 We are now going to use the 5 and 20 moving averages, in order to apply the moving averages to a more aggressive trading strategy, resulting in more signals.

It should be noted that using the 20 and 50 day moving averages also provides very good results in predicting a recovery in the direction of the underlying trend. On the other hand, signals in the opposite direction to the underlying trend will generally be too delayed, as can be seen in the chart below (“death cross” too late). 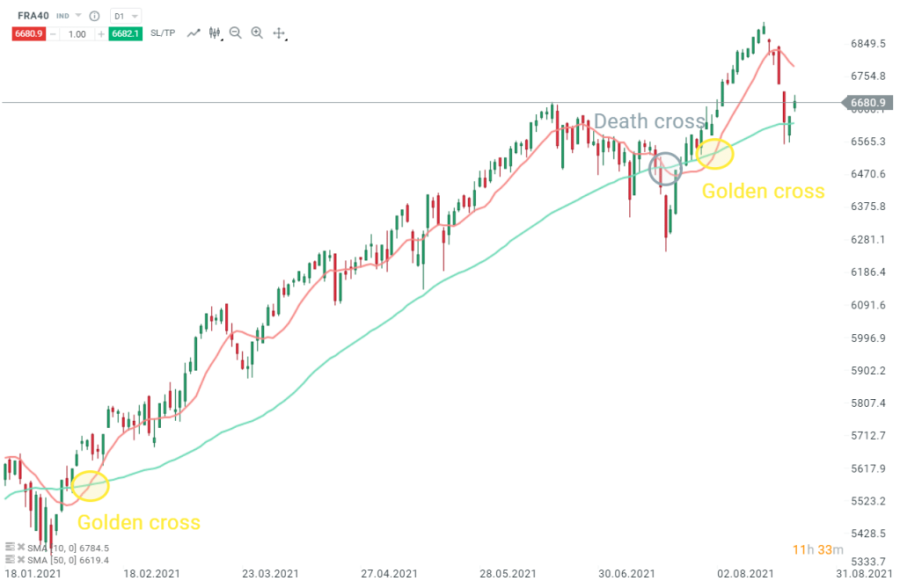 To conclude, moving averages are very easy to use and will suit both beginners and experienced traders. However, their configuration requires a test phase, and the system used must be adapted to each instrument.

Moving averages are a very useful tool in any unit of time, and if combined with other methods they can be very useful. This very versatile tool can also be of great help with regard to money management . Indeed, a moving average can be used as take profit or stop-loss.