Bollinger bands is a tool for technical analysis of financial markets that reflects the current deviations in the price of a stock , product or currency.

The indicator helps to assess how prices are located relative to a normal trading range. Bollinger Bands create a frame within which prices are considered normal. Bollinger Bands are built as an upper and lower border around the moving average, but the band width is not static, but proportional to the standard deviation from the moving average for the analyzed period of time.

A trading signal is considered when the price exits the trading range, either rising above the upper line or breaking through the lower line. If the price chart fluctuates between the lines, the indicator does not give trading signals.

Bollinger Bands ( sometimes a transcription of “Bollinger”) - can be defined as an indicator similar to moving average envelopes, but based on current market volatility . Unlike moving average envelopes, Bollinger bands change not only depending on the direction of the price movement, but also on the nature of this movement (price movement speed).

Bollinger Bands provide a statistical measure of how far a short-term move can go before it returns to the main trend. 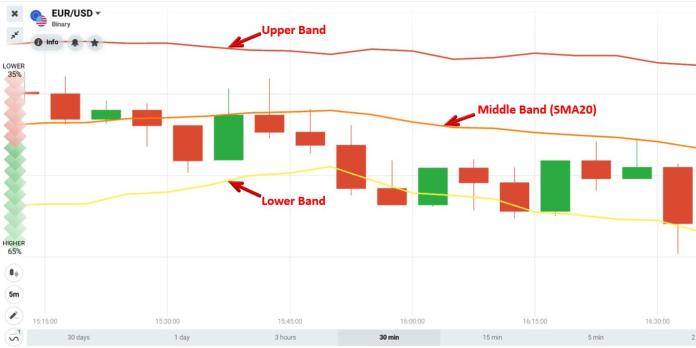 The indicator is superimposed directly on the chart and consists of three lines or bands:

Standard deviation (STD) is a descriptive statistics term that measures the scatter or variance of a sample.

An illustrative example: there are two samples: 1, 3, 5 and 2, 3, 4. It is obvious that both samples will have the same arithmetic mean, i.e. 3. But the range, scatter, or variance of these samples is different: the first sample has 2, and the second has 1.

Calculating the standard deviation by hand is no fun.

Basically, you don't need a formula; as a rule, most of the forex trading softwares like MetaTrader have a built-in function for calculating the Bollinger Bands / standard deviation (in Excel this function is called STDEV ).

How Bollinger Bands are built

The most important issue for the correct construction of Bollinger Bands is the choice of the period of the moving average n . As a rule, a period of 20 is taken, but this is only a recommendation. Each case is unique and requires a special approach. To choose the right period for Bollinger Bands , you need to observe how the price will behave relative to the lower band with a double bottom : the second bottom should remain within the corridor. If the second bottom is out of the lower band, then the period is too short.

The standard deviation is calculated using the above formula. The sample in this case is formed from closing prices. The number of observations in the sample corresponds to the period of the moving average n.

Starting from the nth period on the chart, the calculation of the indicator starts; for each period is calculated:

How to use Bollinger Bands?

John Bollinger explains in his book Bollindger on Bollindger Bands that his indicator is not intended for continuous price movement analysis. It is impossible to look at the indicator at any time and draw a conclusion about the further behavior of the instrument. But at certain points in time, the indicator gives signals that, by themselves or in conjunction with other methods of analysis, allow you to use good trading opportunities with high profit potential.

The main components of the indicator are a simple moving average (middle line) with one line above and one line below, which is plotted at a certain distance from the moving average.

Let us discuss above points with some examples:

In an uptrend, the price will rise above the SMA20. At this time, when the price tends to touch the middle line (SMA20), it will go up. Moreover, when the price breaks out of the upper band, it tends to return to this band. 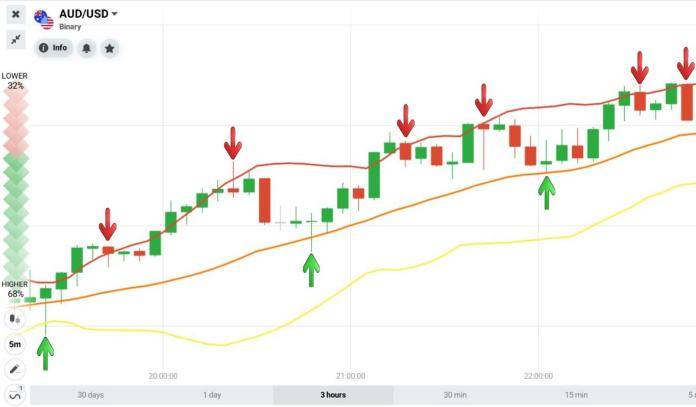 Conversely, in a downtrend, the price will fall below the SMA20. When the price tends to reach the middle line (SMA20), it will roll back. Moreover, when the price breaks the lower band, it tends to rise and return to this band. 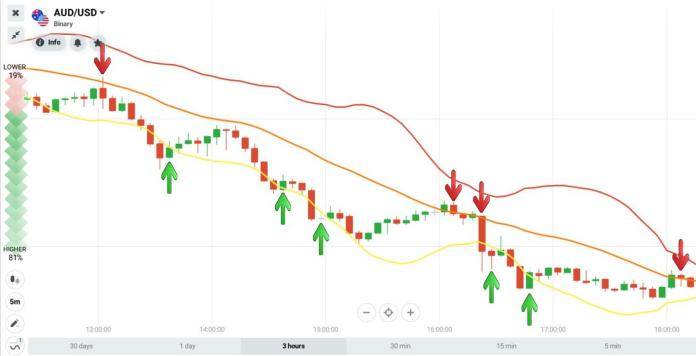 Bollinger Bands and side trend

The W-Bottom is composed of 4 elements: 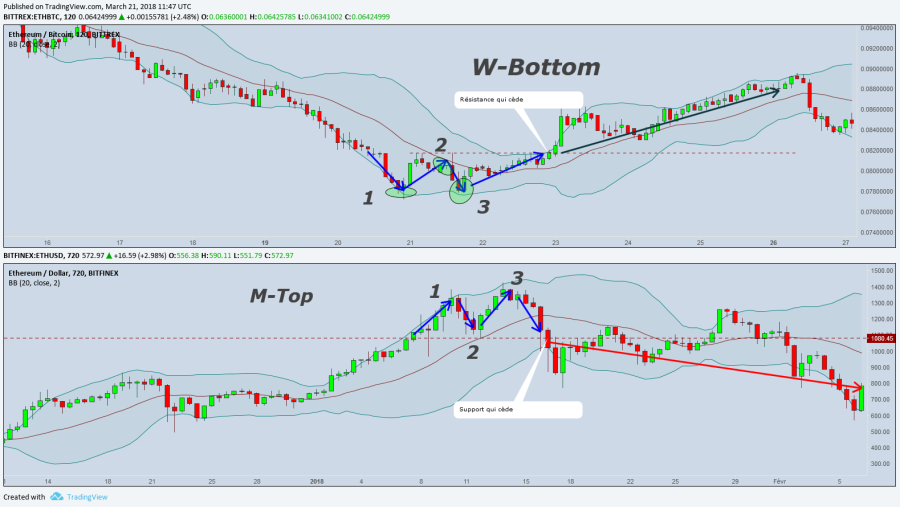 The M-Top is based on the same principle but with the highs of the price and indicates a fall . It is more difficult to pin down, especially when the market is irrational because the first leg of the M will often be much larger than the second (this because of the phenomena of Panic Buy and FOMO . The buying force therefore runs out of steam very quickly on the first branch and the second is much less high. 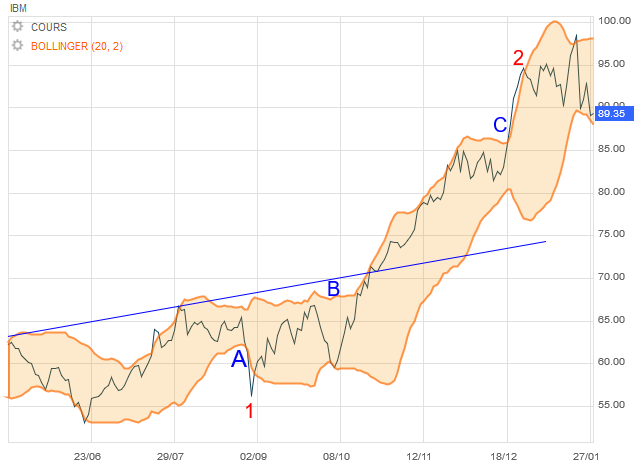 What does the Bollinger tell us? How do we use it? Let's go step by step:

Opening a HIGH option = Price touches or breaks the lower band + RSI is in the oversold zone.

Explanation: When the RSI is in the oversold zone, the price tends to reverse. Concatenate the signal that the price touches or breaks the lower band ⇒ Open UP. 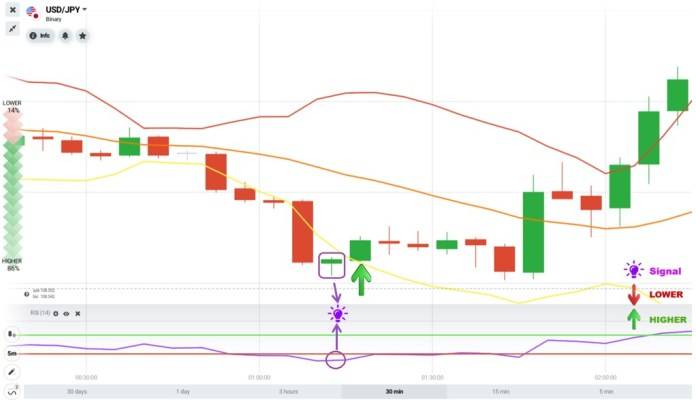 Open the LOWER option = price touches or breaks the upper band + RSI is in the overbought zone. 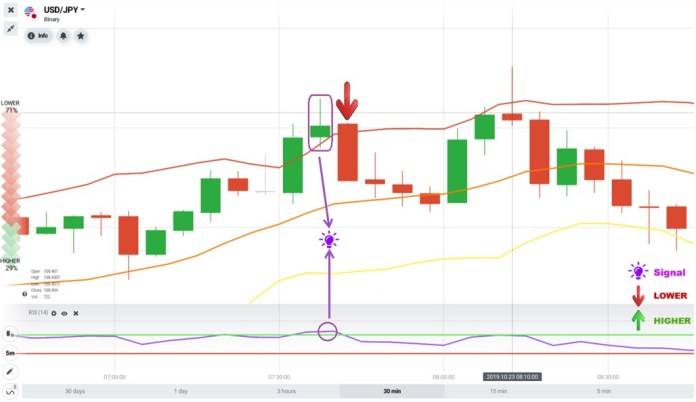 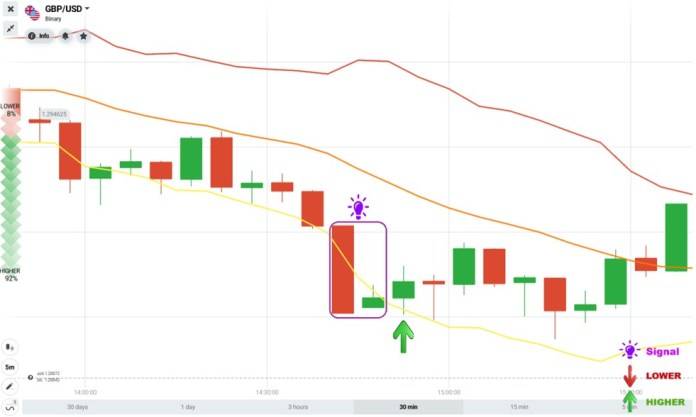 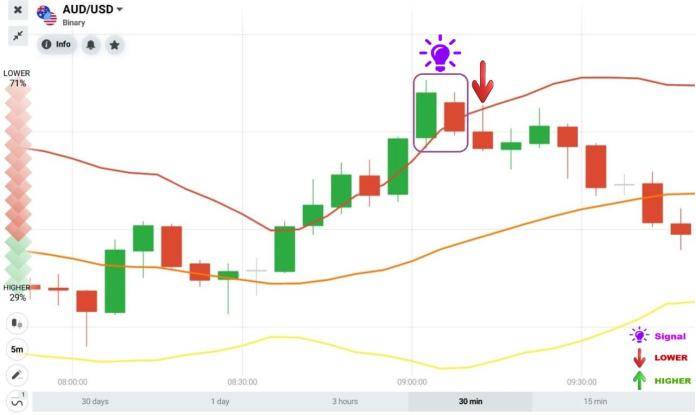 Tips to consider when trading with Bollinger Bands:

Should Bollinger Bands be used?

Bollinger Bands are a classic in technical and chart analysis. It is an easy to understand and relatively intuitive indicator to set up, making it a tool of choice for most novice traders.

However, you should also know that this type of indicator is not perfect. The trend reversal when prices touch/exceed the high and low bands is indeed not systematic. If the current trend is strong, then prices may remain in overbought/oversold territory and continue to rise/fall. It is therefore important to wait for the confirmation of a signal and to use several trading tools and indicators ( MACD , RSI indicator , Ichimoku , etc.)

Bollinger on Bollinger Bands: The Book

John Bollinger is at the origin of the technical indicator, its relevance to market analysis and its practical applications to optimize risk management by taking advantage of variations in volatility.

He gathered all of his thoughts in a book: The Bollinger Bands. This book is the essential bible for all traders who wish to deepen their mastery of this technical indicator. All the strategies and theoretical explanations delivered in the various media (Internet in particular) are based on the work of John Bollinger.

Many online training courses include the book in digital format in their media via Bollinger Bands pdf with selected extracts that illustrate the themes addressed.

This book is a complete guide to investing using every possible way, and in every possible situation, the Bollinger Bands indicator. Some experts even argue that it is perhaps the most reliable and relevant tool for anticipating the evolution of an asset's price.

Bollinger Bands is a very useful technical indicator that allows you to easily identify periods when the price of a financial instrument is below or above its fair value . Bollinger bands use volatility, standard deviation and moving averages, which makes them not very convenient for self-calculation without technique. Every technical analyst should have John Bollinger Bands in service