Aroon Indicator : All you need to know


The aroon indicator is a custom technical indicator that belongs to the category of oscillators in technical analysis. Similar to the Directional Movement Index (DMI) technical tool, it also moves between fixed upper and lower bounds. The indicator consists of two lines, called ascending and descending lines which simultaneously define the direction in which the price is moving.

It calculates the number of periods elapsed since the last highest or lowest.

Aroon an essential indicator for traders


The aroon indicator is mainly used to understand if the price of the security is going up, down or moving in a range.

Every trader must know how to assess the strength of a trend and this indicator rightly addresses this issue, because indeed, this two-in-one tool is a must-have indicator that will help you correctly identify trend reversals, their strengths and their weaknesses.

Some traders consider the aroon indicator to be an upgraded version of the average directional index or adx .

The adx indicator also works the same way, in that it behaves like an oscillator and helps give the strength of a trend.

As noted, the Arron indicator is partly similar to the Directional Movement Index or DMI which was developed by Welles Wilder.


Because of this, the main difference between the aroon oscillator and the DMI is the price.

Formula or calculation method of the aroon indicator

The indicator calculates the number of periods since the last high or low.

The aroon is calculated in two steps, the aroon Up and the aroon Down.

Aroon UP
It calculates the number of periods elapsed since the last high.

The aroon Up indicator is calculated as follows: [(n - Number of sessions or higher is greater than the highest in n-1)* 100 ] / n.

Aroon Down
It calculates the number of periods since the last low.

Interpretation of the aroon indicator in trading

The aroon is a trend indicator that is used to anticipate the transition from trend to range and also determine the strength of the move.


It is important not to buy a security when the aroon Up is below the 50 level, as this indicates that the uptrend is weak and the risk of loss is high.


It is important not to take a short position on a security when the aroon Down is above the 50 level, as this indicates that the downtrend is weak and the risk of loss is high.

When the aroon up and the aroon down move in parallel, then we can speak of a period of consolidation or trading range.

We can define the end of one of these configurations when the two curves have reached an extreme or if they intersect.

Trading strategy with the aroon indicator on the stock market


The basic strategy for this indicator is to use the crossings of the two lines aroon Down and aroon Up. 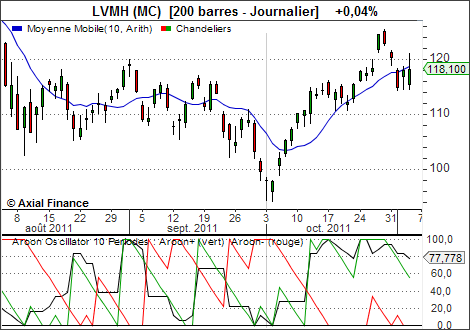 How to filter false signals of Aroon Indicator?

- Sell when the aroon Up crosses the aroon Down downwards but this crossing is above the threshold of 50 (Red line on the chart).

Indeed, when the aroon Down is above 50, it means that the downtrend is weak.

- Buy when the aroon Up crosses the aroon Down upwards but this crossing is below the 50 threshold (Red line on the chart).

Indeed, when the aroon Up is under 50, it means that the uptrend is weak.


This is all the more true when the price moves in a range.

Using the aroon indicator on its own is not recommended, as there is a risk of it generating false signals.

The Aroon technical indicator is one of the trending technical indicators used in technical analysis by traders. This makes it possible to observe and then to evaluate the courses if they evolve or not within a trend. Aroon is made up of two elements to determine whether a movement is in a trend or in a consolidation phase (trading range): Aroon UP and Aroon DOWN.

Aroon Technical Indicator Tutorial with example, How to use Aroon, Filter false signals of Aroon Indicator